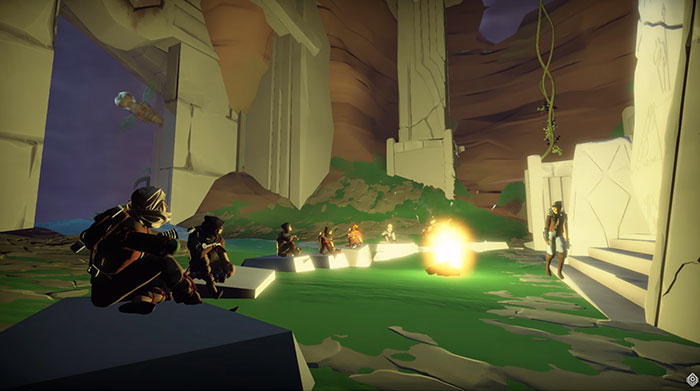 This new round of funding will be used to cement the future success of the studio, supporting its recruitment of top talent that will help define Bossa's strategic focus on AI, User Generated Content and Open Development, as the studio also prepares to launch Worlds Adrift to the public, the first ever game to be built on Improbable's SpatialOS platform.

Mattias Ljungman, co-founder and Partner at Atomico, said, "At Atomico we take investing in fun seriously. Our recent report on the evolution of the games industry shows that it is now worth over $100bn in annual revenue. While mobile gaming has enjoyed a meteoric rise, we're now also seeing a renaissance in groundbreaking PC gaming, and in particular in independent PC games studios. Worlds Adrift is setting new standards of ambition and creativity, and we're thrilled to announce we're leading a $10m Series A investment in the incredible team at Bossa. We're excited to partner with Bossa's founders Henrique Olifiers and Imre Jele as they take gamers to new universes. Henrique and Imre have enormous experience in the sector, having previously been integral to the success of Runescape, one of the most popular MMO games in history."

Henrique Olifiers, co-founder and CEO of Bossa Studios, said, "Since first being introduced at Slush thanks to the Games London team, we've brought together the dream pair of partners who share our vision for the future : Atomico, Europe's largest venture fund with operational excellence at their core and LVP, our original investors and advisors. Together we're able to accelerate Bossa's strategy of creating a new breed of multiplayer games based on crowdsourced content, AI-directed procedural generation, and an open development ethos bringing the community into the fabric of everything we do. There has never been a more exciting time to create games thanks to emerging technologies and platforms, and Bossa intends to be at the very heart of the action, creating popular titles that will capture players' imaginations for years to come".

David Lau-Kee, General Partner at London Venture Partners said, "Of the many hundreds of game companies we see every year, few hold a vision as clear and transformational as Bossa's, and fewer still implement it with such a creative verve and innovative connection with their audience. This is what marks Bossa out from the crowd and why we're thrilled to be continuing with them on their journey."

Bossa has a track record of producing industry-leading innovation, and its games are characterised by vivid imagination and outstanding creativity.

"Previous successes I am Bread and Surgeon Simulator demonstrate the studio's preparedness to take calculated risks based on their intuitive understanding of what gamers want, before gamers themselves know they want it. We have every confidence in their strategy," added Ljungman.

In Worlds Adrift, Bossa is fusing their renowned creativity with the next wave of technological innovation thanks to Improbable's ground-breaking SpatialOS platform. Players build and fly their own skyships, banding together to scavenge from floating, scattered islands. Gathering vital resources to keep on moving or unearthing ancient technologies and knowledge long since forgotten by those who went before, players are readying themselves to weather the storms, crafting their own adventures as they explore the game's seemingly endless skies. Worlds Adrift's revolutionary approach to online sandbox gameplay is leading a new generation of games built with the players from day one and is redefining what's possible in the Massively Multiplayer Online (MMO) market, which accounts for a large portion of the PC market's $30bn revenues.

Players can register now for closed beta of Worlds Adrift at https://www.worldsadrift.com/register/

The Worlds Adrift Cinematic Introduction can be found here : https://www.youtube.com/watch?v=E1-ou3WfTBI

Bossa Studios is a Bafta award winning independent games developer and publisher based in London. We make games for fun's sake and are driven by doing things differently with creativity, charm, and flair. Our titles are loved by millions of gamers worldwide including Surgeon Simulator, and I am Bread. We're also completely in love with our players, and are excited to see what they are creating and contributing to our ambitious new open dev project Worlds Adrift ; a truly unique sandbox that is redefining the MMO genre.

Atomico invests in disruptive technology companies with ambitious founders from Series A onwards. Our experienced team includes founders and operators from the world's most successful technology firms who partner with our companies as they scale to become global winners. Founded in 2006, Atomico has made over 80 investments into companies including Supercell, Klarna, Stripe, ofo, Lilium, 6Wunderkinder and The Climate Corporation. Atomico's team includes founders of six billion dollar companies, and operational leaders who were responsible for global expansion, hiring, user growth and marketing at companies from Skype and Google to Uber, Facebook and Spotify.