The company reports results on both a GAAP and a non-GAAP basis. Please refer to the tables at the back of this press release for a reconciliation of the company's GAAP and non-GAAP results.

Robert Kotick, Chief Executive Officer, Activision Blizzard, said, "Today, we launched Call of Duty: Modern Warfare 3 , which is perhaps the most anticipated video game in history and Call of Duty Elite, our new online service that makes playing together easier and more fun than ever before. Call of Duty Elite is a truly new form of entertainment combining Facebook-like social networking features and online television shows, offering the most accessible way to play Call of Duty games with other people."

Kotick continued, "We continue to strengthen our position as the worldwide leader in interactive entertainment and the broadening of our audiences is confirmation that games are becoming as important as film and television as a mass-market form of entertainment. Our record nine-month results were driven the by the continued strength of our online-enabled franchises. Based on our third-quarter performance, stronger than expected consumer response to our new entertainment property, Skylanders: Spyro's Adventures ,and Call of Duty: Modern Warfare 3, we are raising our full-year financial outlook and expect once again to deliver record operating margins and the highest earnings per share in our company's history."

Kotick continued, "One of Activision Blizzard's greatest skills is the creation and introduction of new intellectual properties. On October 16, we released Skylanders: Spyro's Adventures — a uniquely immersive entertainment experience that integrates the world of toys, video games and online play. The game has received terrific reviews and sales so far are exceeding our expectations. Millions of Skylander toys are already in kids' hands, and we expect the game will be a great holiday success."

Kotick added, "As we focus on 2012, we have a strong product pipeline which features a minimum of two highly-anticipated new titles from Blizzard Entertainment, including Diablo III, and a new Call of Duty game from Activision Publishing. As a result, we expect to deliver another year of profitable growth. I believe our unyielding commitment to excellence and our creative talent around the globe will continue to position Activision Blizzard as the leader in interactive entertainment."

Based on third-quarter performance, stronger than expected consumer response to the new entertainment property, Skylanders: Spyro's Adventures, and an unprecedented level of pre-orders for Call of Duty: Modern Warfare 3, Activision Blizzard is raising its outlook for calendar year 2011 from the estimates it provided on August 3, 2011. 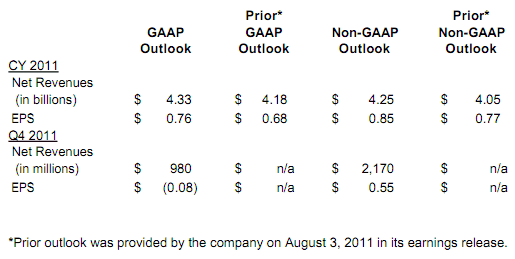 Activision Blizzard's financial outlook is subject to significant risks and uncertainties, including declines in demand for its products, competition, fluctuations in foreign exchange and tax rates, and counterparty risks relating to customers, licensees, licensors and manufacturers. The company's outlook is also based on assumptions about sell-through rates for its products, and the launch timing, success and pricing of its slate of new products. Current macroeconomic conditions increase those risks and uncertainties. As a result of these and other factors, actual results may deviate materially from the outlook presented above.